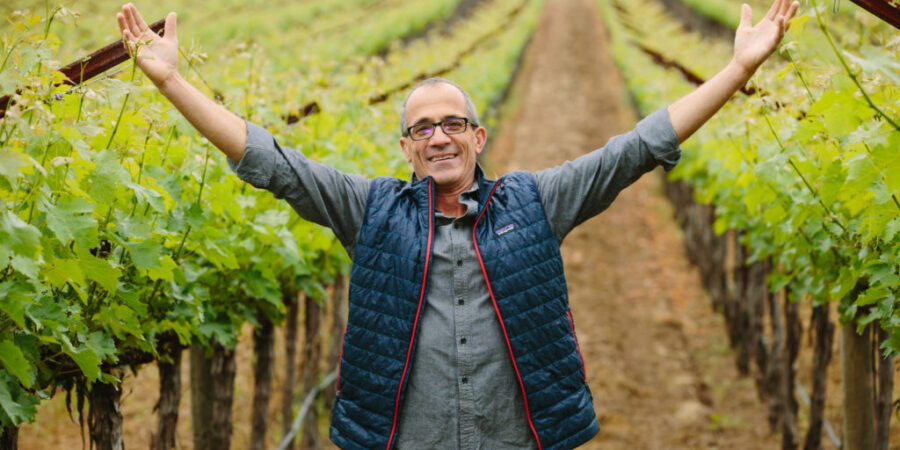 AD VIVUM is a story of a special vineyard, a seasoned winemaker, a meticulous farmer, and Mother Nature.

AD VIVUM is a single-vineyard, 100% Cabernet Sauvignon wine crafted by Chris Phelps, a long-time Napa Valley winemaker who has earned a reputation for his ability to consistently produce unique wines that honestly reflect the terroir of their vineyard origin.

Winemaker Chris Phelps grew up in the hills of the Livermore Valley, east of San Francisco, in a family of wine lovers.  His early interest in winemaking grew out of his parents’ practice of making a barrel or two of Zinfandel or Cabernet for family and friends.  Chris attended UC Davis with the sensible plan of becoming a doctor. However, his love of wine and France pulled him into the school’s Enology and Viticulture program, an internship at Louis M. Martini in Napa Valley, and the world of professional winemaking.

Chris then embarked on a 16-month sojourn in Bordeaux, which began with a year at the Institute of Enology.  He met Christian Moueix, who persuaded him to stay on to manage the 1982 harvest at Château des Laurets, in the Puisseguin-St. Emilion district of Bordeaux.  It was during this trial-by-fire experience that Chris met his mentor, the brilliant Jean-Claude Berrouet, who served for 44 years as the winemaker of Chateau Pétrus. To this day, Chris still credits much of his inspiration as a winemaker and his solid understanding of the technical challenges of the winemaking craft to Berrouet’s tutelage.

Upon returning to Napa Valley, Chris spent twelve years as winemaker at Dominus, as part of the Berrouet-Moueix team. He considers the 1991 and 1994 vintages to be among the greatest wines he has helped to create. He then spent seven years at Caymus Vineyards, managing all red winemaking from 1999 through 2002. Swanson Vineyards then persuaded him to join them as winemaker for 12 years, setting the stage for that winery’s current renaissance.  Chris, who lives with his family in St. Helena, continues to shape wines of great balance, refined texture and singular aromatic and flavor profiles that evoke their place of origin.

The 2016 Cabernet Sauvignon Sleeping Lady Vineyard is pliant, succulent and super-inviting. Dark cherry, plum, lavender and sweet spice notes are all given an extra kick of plushness in a gracious, silky Cabernet that captures the essence of Sleeping Lady. The purity of the fruit alone is striking. Perfumed, suave and wonderfully detailed, the 2016 is exquisitely beautiful. When I think of reference-point wines from Sleeping Lady, Chris Phelps’ Cabernet is very often on top of my mind.

A barrel sample produced from 100% Cabernet Sauvignon coming from the Sleeping Lady Vineyard in Yountville, 56% from Clone 7 and 44% from Clone 191, the 2016 Cabernet Sauvignon Sleeping Lady Vineyard gives up vibrant black currant, blackberries and violets notions with hints of black soil, roses and cigar box. The palate is full-bodied and concentrated with firm, grainy tannins and loads of earthy/mineral layers, finishing long and perfumed. It is anticipated that 437 cases will be made.